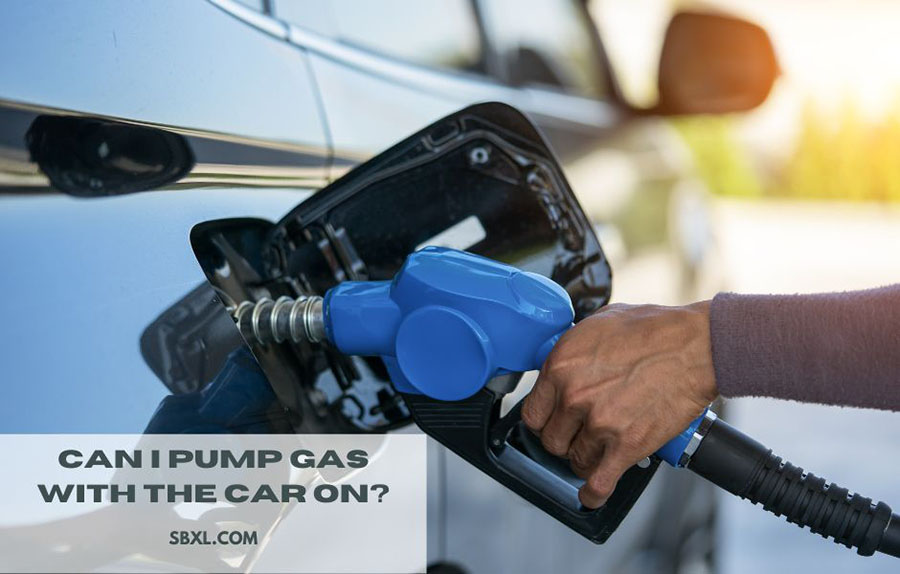 Pumping gas with car on remains a debate among drivers. You should have a definitive answer as it directly involves your on-the-go safety. Beyond that, there are certain behaviors drivers should never engage in while at a gas station.

Let’s sort out this matter on the spot and discuss more extra safety measures worth mentioning when you’re at the gas station. Off we go!

Should You Turn Your Car Off When Getting Gas?

Pumping gas while a car is running is dangerous, though it’s technically feasible with a low potential for errors.

To explain, no damage occurs to the car’s engine if gas is added while the engine is on. But the petrol station and everything in the area might be destroyed in a hazardous flame, as a running car can trigger a fire.

Static electricity poses a safety danger when fueling a running car. Electrons’ movements from one surface to another result in an unbalanced charge. Charges rectify themselves and neutralize via sparks.

If you leave your car on while pumping gas, potential faulty spark plugs could be a risk. Spark plugs include a ceramic insulating cover to prevent rogue sparks from arcing outside and igniting air and fuel in the cylinder. Once this ceramic breaks, it could ignite gasoline vapors in the air around your engine and cause a fire.

Once your vehicle catches fire, the fuel in the hose and gas nozzle could ignite accordingly. Afterward, the flame might reach the station’s fuel reverses. In the worst scenario, the massive fire endangers lives, shuts down roads, and leads to huge costs.

Since you ignored the fuel company’s warnings and suggestions, they’ll likely sue you.

This is an unwritten rule. The goal is to reduce risk as much as possible. Just turn off the ignition while pumping to avoid a car fire and keep yourself safe. Hence, it’s not illegal, but petrol stations constantly suggest you do this.

What To Notice During The Pumping Process: Do & Don’t

Concerning ignition, you shouldn’t light up when filling up your tank. In this case, fuel fires are very likely. The gas tank is flammable, and a fire could start with just one careless flutter of cigarette ash.

Keep An Eye To The Pumping Process

Overall, fuel pumps are straightforward to use. The fuelling process can be completed hands-free thanks to a locking mechanism that keeps the spigot open until it’s time to disconnect.

The pump is supposed to shut off when it detects that the tank is full, yet this isn’t always the case. Thus, instead of getting out to use the restroom, sipping some coffee, or doing anything else, be sure to monitor the pumping operation.

Did you know that gas cans come in different hues? The red canister represents gasoline, the blue one is kerosene, and the yellow one is diesel. The oil is stored in green containers.

OSHA regulates the color-coded containers (or color-coded tags) to make it simpler to pinpoint the correct location for carrying fuel.

Also, using plastic bags, barrels, or other non-fuel-specific containers is strictly forbidden due to the safety risk involving fuel leakage.

See also: what is the color of gasoline?

During long drives on vacation, it’s vital to stop frequently for food and gas, but it’s never a good idea to leave a child or pet in the car while you refuel.

If you accidentally knocked into a live nozzle, petrol would spray everywhere, and you’d immediately seek the emergency button. Hence, take the kids to the restroom and call the dog out so that they can do their business.

Leaving your phone active while refueling could release electrical charges that could spark a fire.

It could also distract you if the automatic shutoff fails and petrol spills out.

Keep Fuel Off Your Eyes And Skin

If you get gasoline on your skin, wash it off as soon as possible with lukewarm water and soap. Regarding gasoline getting into your eyes, remove your contacts (if any) and wash them well for 15 minutes with tap water.

Don’t Go Back Inside Your Vehicle While Refueling

Reentering your car can raise the risk of static fires. If you must get inside while pumping gas, discharge static electricity accumulation by touching on any metal part outside the car.

Although your car won’t be harmed, it’s unsafe and not recommended in most if not all places for pumping gas with the car on. It’s best to be cautious to avoid flash flames and save lives.