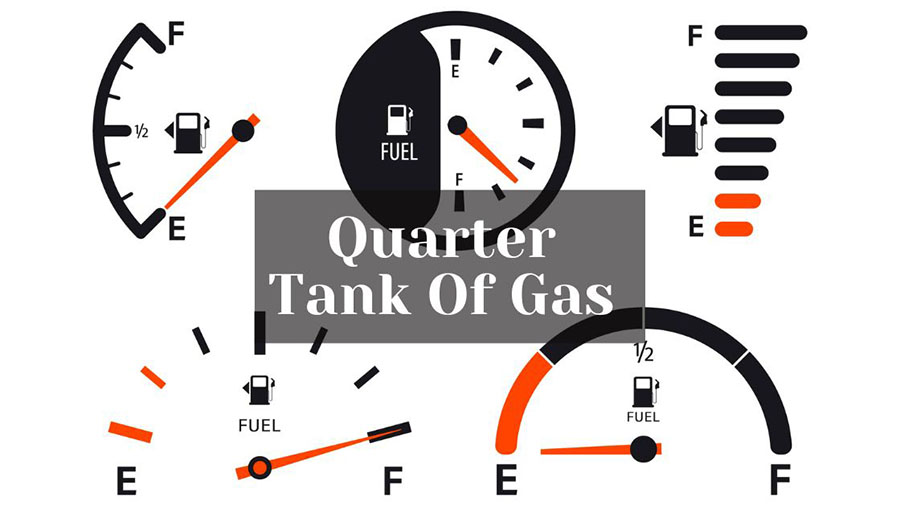 When driving, keeping track of your gas levels is vital. It’s easy to see when you’re almost out of fuel and need to get to a nearby station. But it can be trickier knowing how much is left in the tank, like ⅛, ¼, or ¾. Lucky you, practicing good fuel management skills would help.

How much is a quarter tank of gas? It’s one of the hot topics for fuel management skills. This article will walk through everything you need to know about checking your gas tank and how many miles of driving you have left with just a quarter of a tank.

How Many Miles Is ¼ Tank Of Gas?

The answer will depend on the car types you use. By and large, the average miles of a quarter tank for all listed vehicles are about 140 miles.

Although city driving can be up to 50% less fuel efficient than highway driving, at 25-35 mpg, you can travel for about 3 hours with ¼ tank before refueling.

So with 1/8 tank of gas, how many miles can we get? It’s roughly 70 miles on average (for all models above).

Here comes the quick run-down of 5 popular cars on the market: Honda Accord, Toyota Tundra, Ford Mustang, Ford F-150, and Toyota Prius. Check them out!

With a quarter gas tank of 3.7 gallons, Honda Accord can travel between 120 and 150 miles before draining off fuel.

Overall, the entire 14.8-gallon fuel tank works wonders for fuel-efficient Japanese sedans. The vehicle mileage ratings include 29 mpg in the city, 35 mpg on the highway, and 32 mpg combined.

With a 5.6-gallon or a quarter gas tank, a Tundra can travel between 120 and 140 miles prior to running out of gas.

Although the Toyota Tundra had a reputation as a gas guzzler by far, the V8 engine certainly stands out. In particular, the automobile’s fuel tank can hold up to 22.5 gallons of gas. EPA estimates for its gas mileage are 20 mpg in the city, 24 mpg on the highway, and 22 mpg overall.

Regarding Ford Mustang, if you drive properly, you can get another 100 miles on a quarter tank (equal to below 4 gallons).

With the remaining 5.75 gallons or a quarter tank left, you can travel at least 130 miles (with some city driving), and closer to 150 miles (on the highway).

A quarter tank of gas is equivalent to 2.85 gallons, allowing the Prius to travel at least 160 miles without refueling, with an additional 25 miles of range thanks to its electric power. In brief, you can reach roughly 200 miles with a quarter tank left.

While it is a very efficient hybrid, the 2017 Toyota Prius’s gas tank can only hold 11.4 gallons.

The EPA estimates that the vehicle achieves excellent gas mileage of 56 mpg overall (53 mpg in the city and 58 mpg on the highway).

How Do The Gas Gauges Work?

The gauge will reach its upper limit whenever you fill-up the maximum capacity.

In fact, the gasoline gauge is incorrect to some extent. It still points at the maximum mark even when you fill up with one or more gallons less. That explains why you usually see the gauge still staying in the full level after you have driven for quite some time. This is a trick of the manufacturer to make drivers believe their vehicles are more fuel-saving than they are.

We’ve all been there: you check the gasoline gauge near the end of your range. We often stop at the gas station and refuel as soon as we notice the low fuel mark because the car can only run 20-50 miles.

Remember that there is a non-trivial amount of fuel that the gas tank sensor never spots as it is contained in the pipes connecting the fuel pump and the injectors.

The gauge may not show correctly when the tank is full or empty. Most drivers will see that the gauge seems too quick in the second half of the tank and too slow in the first half. Perhaps, the shown figures are often only correct at the halfway point.

Some may dismiss this as mere speculation, but it’s the reality. When going from full to 3/4, the decline rate may nearly double that of when going from 1/4 to empty.

Most people would stop for petrol at the quarter-tank mark as they believe it’s a reliable moment to refuel.

Is A Quarter Tank Of Gas Enough?

On a big truck or SUV with a gas-guzzling engine, a quarter tank is considered “low fuel.” When the fuel gauge in such a vehicle reaches this point, the driver should start looking for the nearest gas station.

Keeping the tank at least half full is best if you drive a gas guzzler. You should maintain a 3/4 tank of gas for the best when it comes to long trips.

On particularly fuel-efficient vehicles or when traveling at highway speeds, a quarter tank is not an issue. Thanks to technological advances, cars tell you how much gas you have left and how far you can drive before refueling.

Here are some criteria for pinpointing how good an amount of a quarter on a gauge:

What Is A Quarter Tank Of Gas?

The 1/4 mark is the first segment below the half-tank mark and is located 45 degrees from the dial’s center. There is a 1/8 tank mark, followed by a 1/4 tank mark, counting up from the tank’s bottom.

Some cars use a distinct color at the 1/8 mark to indicate low gas, while others do it once the gauge reaches the 1/4 point.

Typically, a quarter tank of gas is approximately 3–5 gallons of fuel, based on the models.

Is It Better To Fill Up At Half A Tank?

Yes. Filling at half a tank can reduce fuel evaporation. In fact, fuel evaporates, and the extra fumes flow into the EVAP system to be filtered and used as fuel. Also, it prevents the gasoline pump from scraping the tank’s bottom.

That said, you can safely refill at one-fourth as it runs no risk for your automobile.

Now that you’ve known a quarter tank of gas is equal to how many miles. You can also see why this knowledge matters in your daily commute. As such, you’ll decide the best time to refuel your car.

Many guys out there may also find this post informative. Please forward it to them

How To Get Free Solar Panels From The Government (No Cost)